Diary of a painting – Katrin Mäurich 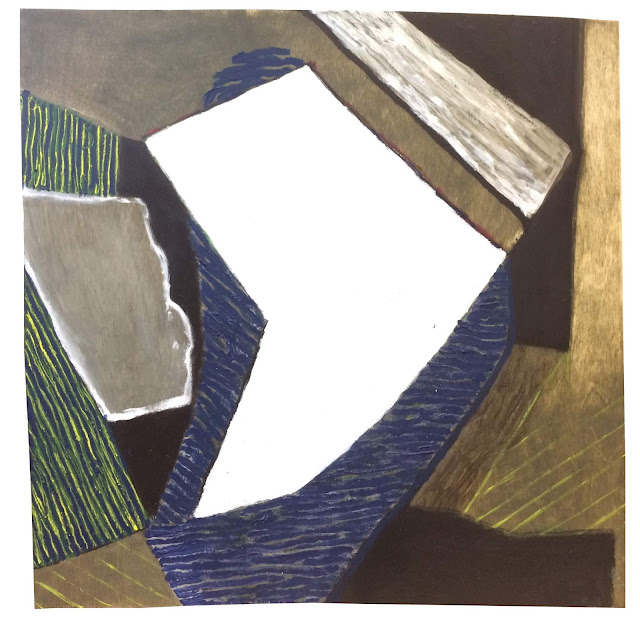 I painted ‘dunkelheit hält alles an sich 2017’ (49x51cm) in January/February 2017 on beautiful 18mm B-grade birch ply. I bought a 1,22 x 2,44 m sheet of this last year [2016], cut it up with my jigsaw, sanded the pieces and priming the surfaces with oils or varnish (though sometimes I leave them raw).
This painting has been primed with linseed oil. It is quite a typical painting for me in that it has been build up or constructed over time in a rather oblique fashion – through successive adding and removing of figures, lines, layers of colour and texture. I used pressed pigments (conté, pastels) and acrylic paints. Colours in this painting (as far as I remember): Ivory and Mars Black, Zync and Titanium Whites, Cadmium Yellow, Burnt Umber, Ultramarine, Titan Buff, Raw Sienna, white, brown and black conté (Carrés Esquisse de Conté).
Terry is always very interested in the colours used in the making of paintings and I know that many other painters are too. It is not something I can talk about very well as my approach to colour is entirely intuitive and I do not think about it in an abstract way but rather use it as circumstances suggest. At the beginning of this painting for example I had a rather lovely mixed brown left over from a previous painting and hating waste I used it to tint the birch (which was golden and shimmered in the light – the sanding and oil finish made it into a very seductive, precious object). Then the next thing I did was in response to that brown – I rubbed some of it off again to let the surface ‘breath’ a bit more. That created a vague, smokey atmosphere that was asking for something definite or substantial to contrast with. So I responded with a conté (iron-oxide) line drawing. After some looking and working on other paintings in between, I saw how I could take the next step – there was something interesting going on with two shapes in the centre, a wrapping and surrounding which I liked. Playing around with this took me a few steps further, then it became too rigid and I decided to sand some of the paint back again and do some more looking and turning-away, working on other paintings in the meantime. Often I will find the next step for a painting while I am working on another. In this case it was the Yellow I was using on ‘shanten 2017’ which I was working on nearly concurrently to ‘dunkelheit…’. I could see that the yellow would push this painting on and that worked well – further opportunities opened up in the wake of introducing it which brought me quite close to the finish of the painting. The very final move was to apply a very thick, textured White to the centre. I sat with that for a while and returned to look a couple of times until I was absolutely certain it was finished. Since then, the painting has grown on me more and more. As time passes I can judge my paintings more clearly and appreciate their quality.
I used to give utilitarian titles to my paintings but changed this over the last couple of years or so. They are now more considered and personal. This painting’s title is from a Rilke poem I translated for a close friend during that time:

Oh darkness, whence I came
I love you more than the flame
That so confines the world,
in that it shines
only for some exclusive
circle,
beyond that it remains illusive.
Darkness though, holds everything close:
creatures and flames, animals
and me,
How it gathers
humankind and deity
both –
And thus it may be: with great might
Something stirs close to me.
I believe in night.
I believe in that which thus far remains unsaid.
I want to set my pious notions free.
What no one yet dared to desire,Will soon be second nature to me.
(German: http://www.rilke.de/gedichte/das_buch_vom_moenchischen_leben.htm)
During the making of this painting I read and listened to audiobooks of fiction:

’I Know Why the Caged Bird Sings’ by Maya Angelou,

‘A Whole Life’ by Robert Seethaler;
and non-fiction: various articles of political analysis (mostly online), Drift into Failure by Sidney Dekke and some other texts on systems thinking, risk management, incident investigation and clinical governance in general (for my job);
I saw: ‘Moonlight’ by Barry Jenkins,

‘Play me Something’ by Timothy Neat and John Berger,
‘Jonah Who Will Be 25 in the Year 2000’ by Alain Tanner and John Berger;
Gorky’s ‘The Lower Depths’ at the Arcola Theatre;
^^I took a trip to Scotland and walked along the coast from Cromarty to Rosemarkie.